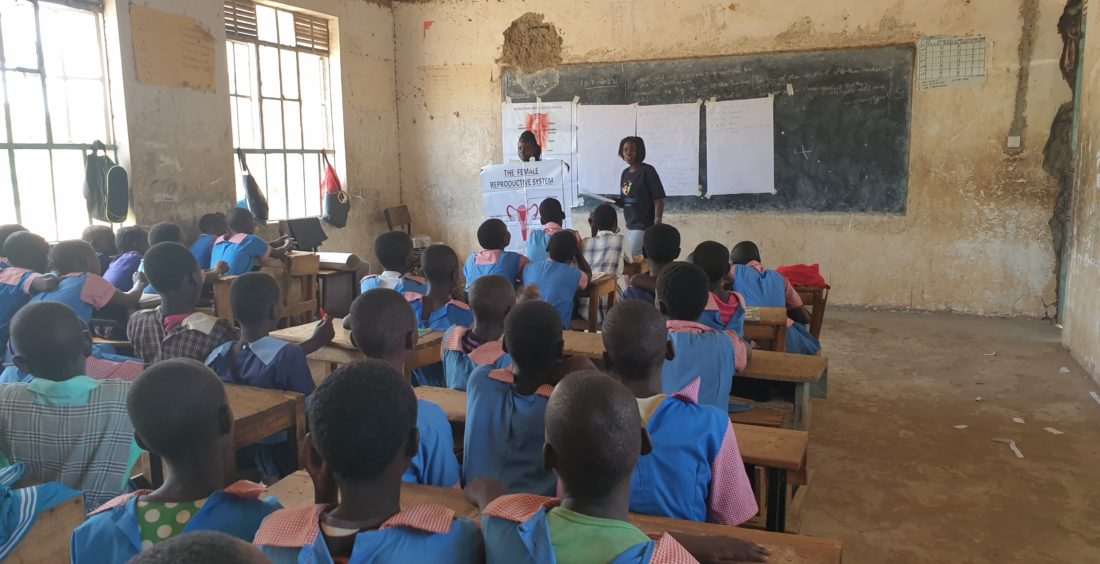 It is 9 am in the morning and the sun is already hot in Baringo, Kenya. We are all in the car, fully parked with the Mundo Posible equipment that we use for the training sessions. One of the directors from the schools in the location we are heading to is in the car with us, and we are all enjoying a hearty conversation in our different languages. Some are speaking in English, some Swahili and others Ilchamus, as we drive through a rough road. We are headed to Kailer Primary school, where we are to begin teaching the first session on menstruation, hygiene, and sexual and reproductive health education to both the boys and girls.

In this school, the training is going to be in their local language, Ilchamus, which is the language spoken largely by the population in this area. Due to the remote location and poverty in the area, the children have not learnt how to speak either of the national languages, namely, English and Swahili.  The training will focus on the problems faced by girls, particularly in this community.

Two female and two male trainers, all four Ilchamus, begin the session in separate classes amidst excitement among the children. Having the boys and girls separated during training has been crucial to ensure that the children feel confident enough to ask questions that they would otherwise feel to shy to ask. For example, questions within the topics of puberty, menstruation, sexuality, sexually transmitted infections, and female genital mutilation (FGM). In a patriarchal society such as this where women’s voices are second to the men’s, it is important to offer a secure and safe space during the training sessions.

When lunch break arrives, many of the children remains hungry. Most of them remain at school. The government used to offer a food program for public schools, but now many of the schools only offer maize or rice to the children. In Kailer, the food finished long time ago, and there is no food offered at school. We also notice that they do not have even a drop of water, with several water tanks standing on the ground ghostly, completely empty.

Visiting the latrines, we realize that the situation is just as bad. The holes of the latrines are full and the walls of the toilet and toilet floors are collapsing, letting out the stench from the human waste inside. The staff latrines are the same, despite the school having been constructed only 10 years ago. The education coordinator commented that in the absence of funds for development from the government, the community is left with the responsibility of raising funds for such situations, yet, the poverty engulfing them does not allow them to afford even food.

We seat with the vice principal to try and find a solution with out limited resources, and it becomes clear that the priority is water supply for the school. In the next week, we will have our final session with the boys and girls together with the community at the school and try to find little solutions for big problems.